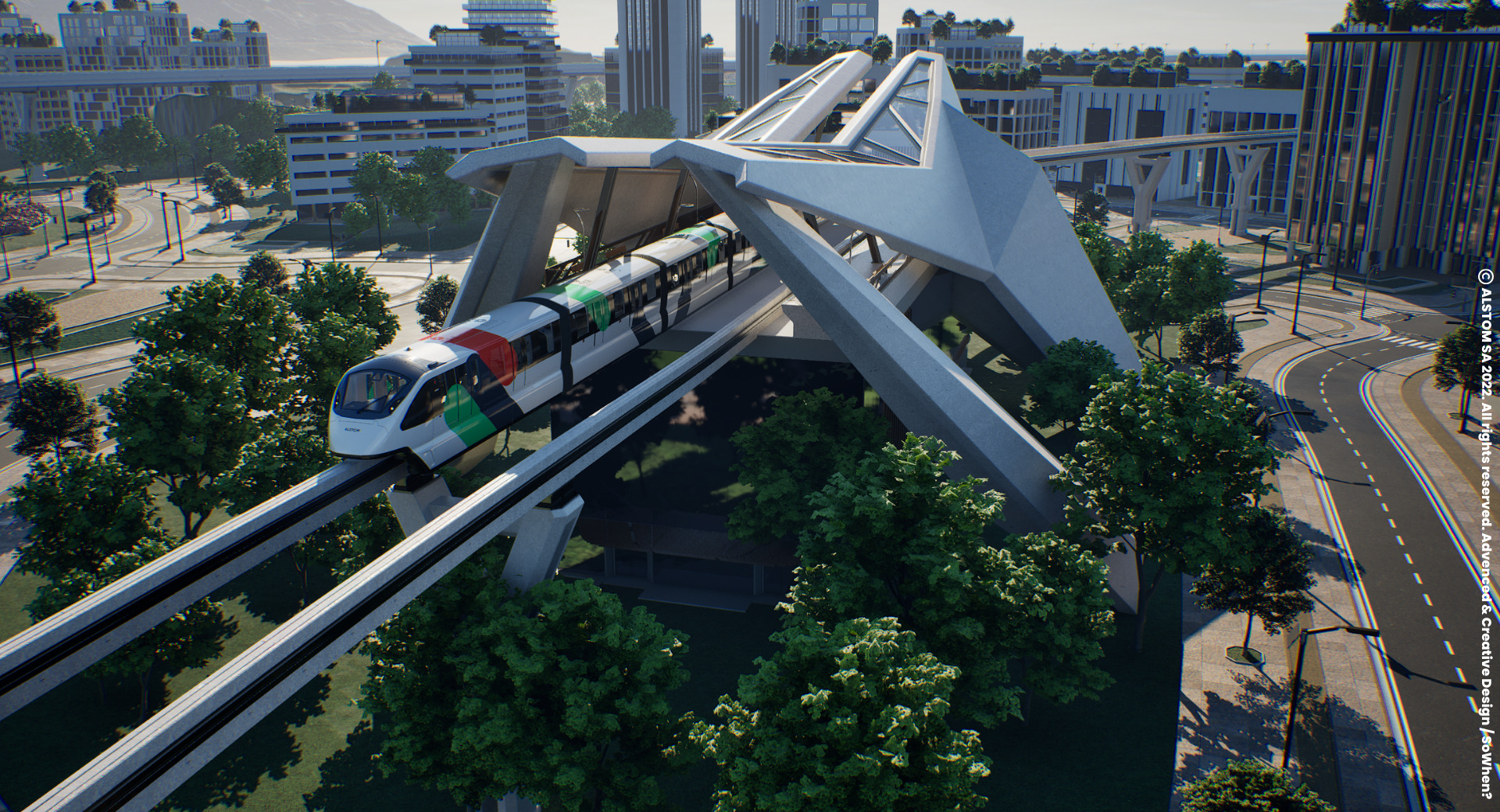 French studio SoWhen? has unveiled an impressive project created for Alstom, a group focused on transportation (they are especially active in the in rail transport markets).
They created a massive and interactive 3D world using Unreal Engine. The goal was to be able to use it as a virtual showroom for Alstom products such as trains, tramways, subways.

Of course, such vehicles need a lot of space to move. Which is why SoWhen? created a big virtual world: about 4 square kilometers (1.6 square miles) with a virtual city. This way, complex interactive simulations can take place within this virtual world. In other world, in addition to the trains themselves, you can also watch them in action. Whole fleet management systems are also included.

Thanks to this unified virtual world, Alstom now has a tool that can be used on trade shows, with several layers of complexity depending on who they are addressing (for example the minister of transportation, engineers that will be using the trains and fleet systems, or the media).
For example, the virtual world can be used to provide an overview of the city , jumping from one point of interest to the next. But you can also, if needed, showcase specific parts of a train and highlight machine parts.
Several scenarios are included to showcase what the fleet management system is capable of. What happens, if there’s a fire at the nearby station? Or if a train has to slow down unexpectedly? All of this can be triggered at will.

This simulator car also be used as a creative tool, to create still renders of videos for internal and external communication, for training, etc. SoWhen? explains that this will allow Alstom to generate new content in a cost effective manner.

Here is a video that will give you a better idea of what this virtual world is capable of:

SoWhen? explains that 7 months were needed to give life to the 3D world used for the virtual showroom. Using Unreal Engine 5 was challenging, since the engine was still in early access when the team began working on this project. SoWhen? had to adapt and tweak the project when a new release was available, in order to improve the showroom.
A vast number of assets were also created, including those depicting Alstom products. Of course, these assets had to be light enough to be used in real time visualizations, and SoWhen? had to make sure materials and shaders were consistent with each other, so that the trains have a similar look.
Last, but not least, SoWhen? also needed to breathe life into this world. They had to create and animate vehicles, crowds that would move and interact in a believable way.

Of course, SoWhen? and Alstom worked closely on this project. Epic Games also got involved to provide technical support.

During the last Unreal Fest which took place at New Orleans, SoWhen? gave a talk about this project. They went behind the scenes and explaines, for example, how Nanite was used to visualize very heavy 3D models, or how Unreal Engine 5 improvements when it comes to massive virtual worlds were used. These key features explain why they did not stick with Unreal Engine 4.
You will also learn how SoWhen? created buildings, infrastructure, virtual humans.

It should be noted that the project is still ongoing: improvements are planned, with additional content.
The SoWhen? team will also discuss this project in depth in the coming weeks, on the official blog of the studio.

Mush-Mush & the Mushables: here’s why this TV show is betting on Unreal Engine for season 2