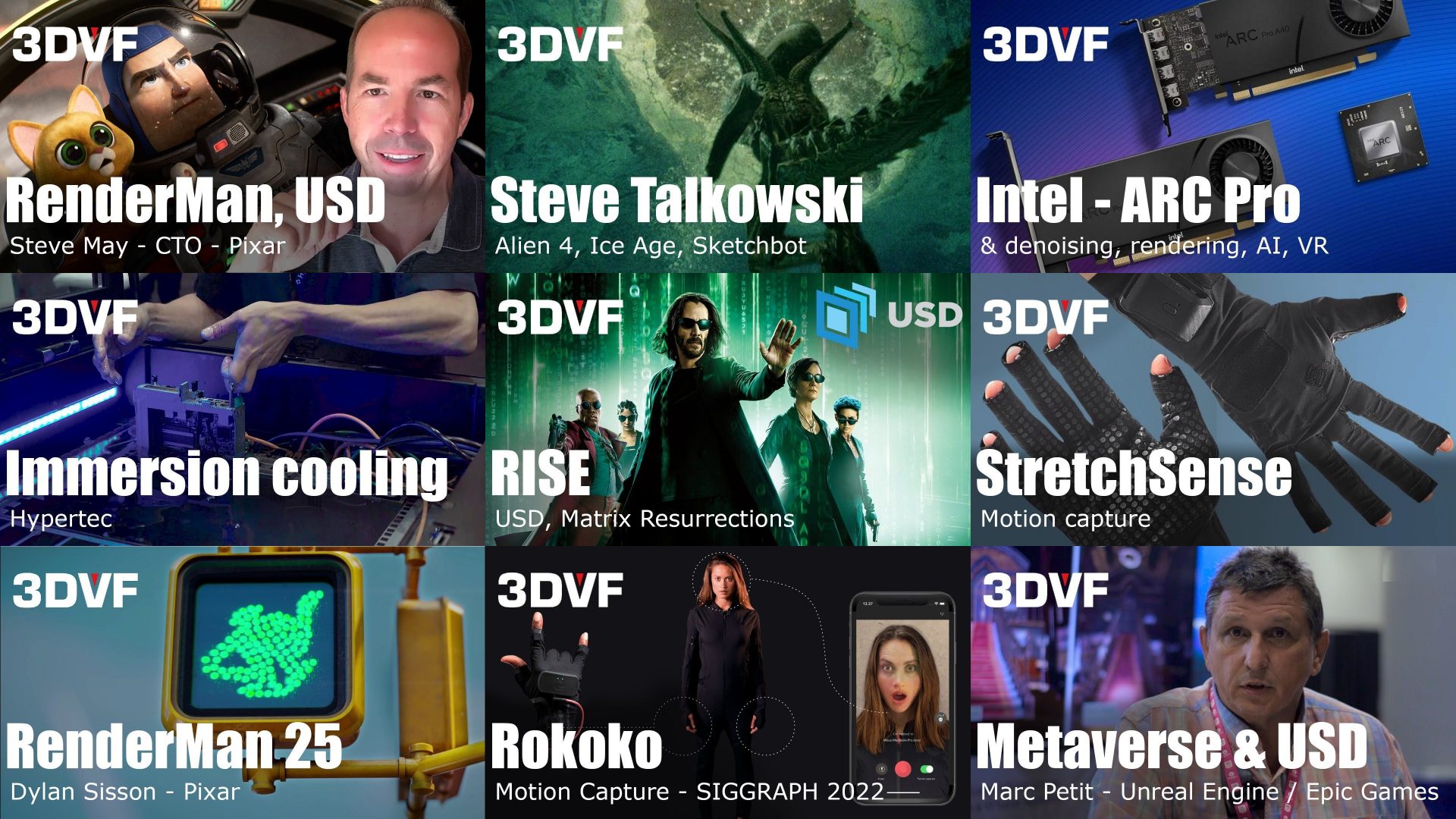 This summer, the 3DVF team attended SIGGRAPH, the largest CG/VFX/Animation conference in the world. We interviewed several studios and companies. Here’s a recap with all our videos related to the event, in case you missed one or two! You’ll find under each video the timecodes/chapters.

Marc Petit, VP, Unreal Engine Ecosystem, Epic Games, gave us his vision of the progress made by Unreal Engine since 2017, told us about Epic Games at SIGGRAPH. We then discussed the metaverse: what is it, what are the advantages of the metaverse? Why is USD (Universal Scene Description) such a buzzword at SIGGRAPH 2022, and what are the main challenges towards building the metaverse? Last, but not least, we asked Marc Petit what is the key to success when it comes to external growth, to avoid the death of the tools and technologies you’ve just acquired.

We interviewed Pixar CTO Steve May & to discuss the latest RenderMan improvements (new denoiser, XPU), how Pixar manages to turn research projects into features ready to be used by RenderMan users. We also discussed USD: is this 3D scene description format really the key to the metaverse? Is it ready for it, or is there still some work to do? And how does Pixar & other companies work together on improving it? Steve May also gave us his take on Omniverse, and explained how Pixar gets inspired by SIGGRAPH.

We also had the opportunity to sit down with Dylan Sisson – RenderMan, Pixar Animation Studios. He told us about the upcoming release 25 of RenderMan and the main improvements.

With Hypertec discussed remote solutions, cloud computing as well as immersion cooling technology and how to make the Media & Entertainment industry more sustainable.

We had the chance to interview Steve Talkowski to ask him about his career. He told us about the early days of the industry, SIGGRAPH back in the 80s, the birth of Blue Sky Studios. He told us about his work on movies such as ‘Joe’s Apartment’, ‘Alien Resurrection’, ‘Ice Age’. We also discussed the software used at the time (including Softimage), and his tips for young artists.

We sat down with VFX studio RISE to discuss their adoption of USD as well as their work on Matrix Resurrection, The last Voyage of the Demeter. Apologies for the sound issues: don’t hesitate to turn on subtitles (available in English/French) if needed!

Danish company Rokoko showcased their motion capture products and services. Jakob Balslev, CEO & Founder of Rokoko, told us about their latest announcements and what Rokoko has in store for the future. He also told us about their customers, NVIDIA Omniverse integration, and explained why he felt 2022 was “the year of motion capture” for SIGGRAPH. Last, but not least, we discussed new markerless, camera-based solutions that use AI for motion capture, such as Plask.ai or Skinetix.

We met with Intel to discuss their latest announcement & technologies, from ARC Pro GPUs to uprezzing, rendering, denoising and VR.

Substance 3D Modeler is out of beta, here’s why you should try it

Magnifica: the fate of a young artist (Gobelins short film)