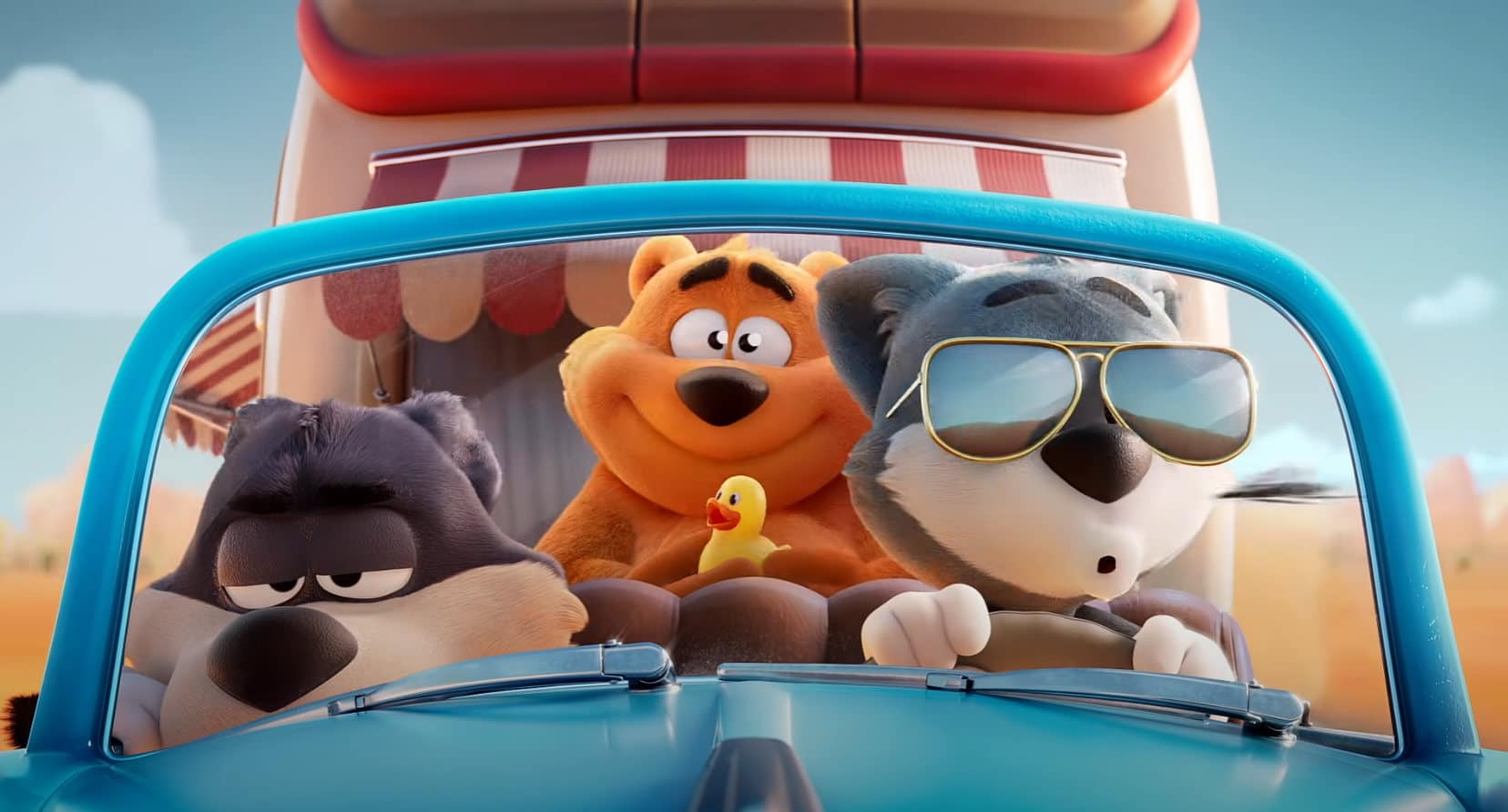 London-based animation studio Blinkink recently teamed up with the director Louis Clichy (Asterix: The Mansions of the Gods, Asterix: The Secret of the Magic Potion) to give life to Tumbleweed, a short film featuring the characters of the mobile game Toon Blast. The short features a car chase between the beloved characters and… A revenge seeking tumbleweed!

We took the opportunity to interview Blinkink (and more precisely Quentin Vien, Creative Director of the studio). The team was kind enough to share lots of details about the making of the movie, both on the artistic and technical sides!

3DVF: Hello Blinkink ! First of all, can you tell us a bit about the studio and its history?

Blinkink is an animation studio based in London. It is an award-winning company that covers the advertisement, music and broadcast industries.
We use a variety of techniques such as Stop motion, 2d animation, CG or Live action.
The studio has now a permanent team of multi-talented artists focused on CG content.

In the last 3 years, we gradually produced more complex CG work. Each project allowed us to improve our workflow, pipeline and build a team of freelancers. Until we felt we were ready to take on something as big as Toon Blast!

3DVF: You recently unveiled Tumbleweed, an animated short created for the mobile game Toon Blast by Peak. What was the client asking for, and how big was the team?

Quentin Vien/Blinkink: Peak reached us with the best brief a Studio can get, they wanted us to translate their Toon Blast world and characters into an animated CG world.

So we pitched some storylines and did a little test to show what we thought the universe could look like. They loved it.

We all wanted the film to be a great piece of animation, something you would want to watch over and over again!

3DVF: Louis Clichy (Asterix: The Mansions of the Gods, Asterix: The Secret of the Magic Potion) directed the short film. How did he get involved in this project, and can you tell us about the way you worked with him ?

Quentin Vien/Blinkink: It was obvious from the start that the project would need a heavyweight director specialised in animation.

BlinkInk and Eddy have been long-time collaborators so we were excited to win a project that gave us the opportunity to harness Louis’ incredible talent as an animation director.

During that time we also defined the look of the characters and the world, and worked with our art director, Camille Perrin, on a very detailed light-board.

We wanted a very precise blueprint of the film, so later we could focus only on “making” it.

3DVF: Due to the Covid-19 crisis, the team had to work remotely. How did you adapt to this challenge?

The first time we sat down to “think” our pipeline, years ago, working remotely was one of the requirements. So, it was always on the road map and more importantly ingrained in the design, we “just” had to move it forward in the schedule.

Corentin Charron (our pipeline TD) took on the challenge and adapted BIP (our pipeline) to work remotely via VPN and use a cloud-hosted database.

The next challenge was teamwork and transferring all the small interaction into digital. Conversations that normally take 3mins would take hours.

In a way, making a film remotely is not new, you submit your work to be reviewed and we meet virtually once a day for feedback.

We had to put some guidelines in place for people’s well being and make sure the team spirit stayed high.

There’s a silver lining to the remote work and the pandemic, it allowed us to recruit freelancers outside of the UK. Usually, we prefer to have the people in the studio, but as everybody was remote, we extended our team to Europe.

We probably would have never considered a worldwide team otherwise, it definitely expanded our recruitment process on this project and on all the next ones.

3DVF: The Toon Blast characters were created in 2D ; they have since been animated in 2D and stop motion on the official channel, but this is the first time they were animated as CG characters. Was it hard to “translate” the characters while keeping them close to their original design?

There were three challenges: stay true to the characters, make the design work in 3D and find the right CG style.

Their personality mostly came from story writing but we needed to make sure we had the right type of animation too.

We organized the team per character rather than per department. We had a modeller, a rigger, an animator and a lookdev artist working together from the beginning so that they could all share their expertise.

We rigged the characters as soon as we were happy with the body shape and started animation tests (walk and run cycles) to figure out how the characters would move: how much is too much stretch? Do they have motion blur? How do you act in a car?

Meanwhile, the modellers worked on a range of blend shapes, getting feedback from the animation supervisor, Conor Ryan.

This needed to give animators the ability to shape the character’s face in a very “drawn” way.

We put everything together into an amazing rig. This meant that the animators had a lot of freedom and so the animation had to be tightly supervised in order to stay true to the model and so the character would act the way they should. Conor and Louis worked together to find the right balance between all the different “Cartoon” animation styles.

We had a similar challenge for the CG style, we wanted the characters to have physicality, but with the way they moved they could quickly end up being creepy if they looked too realistic. This was made harder since they are covered in fur.

In the following pages: fur, tumbleweed, FX and the climax of the movie.