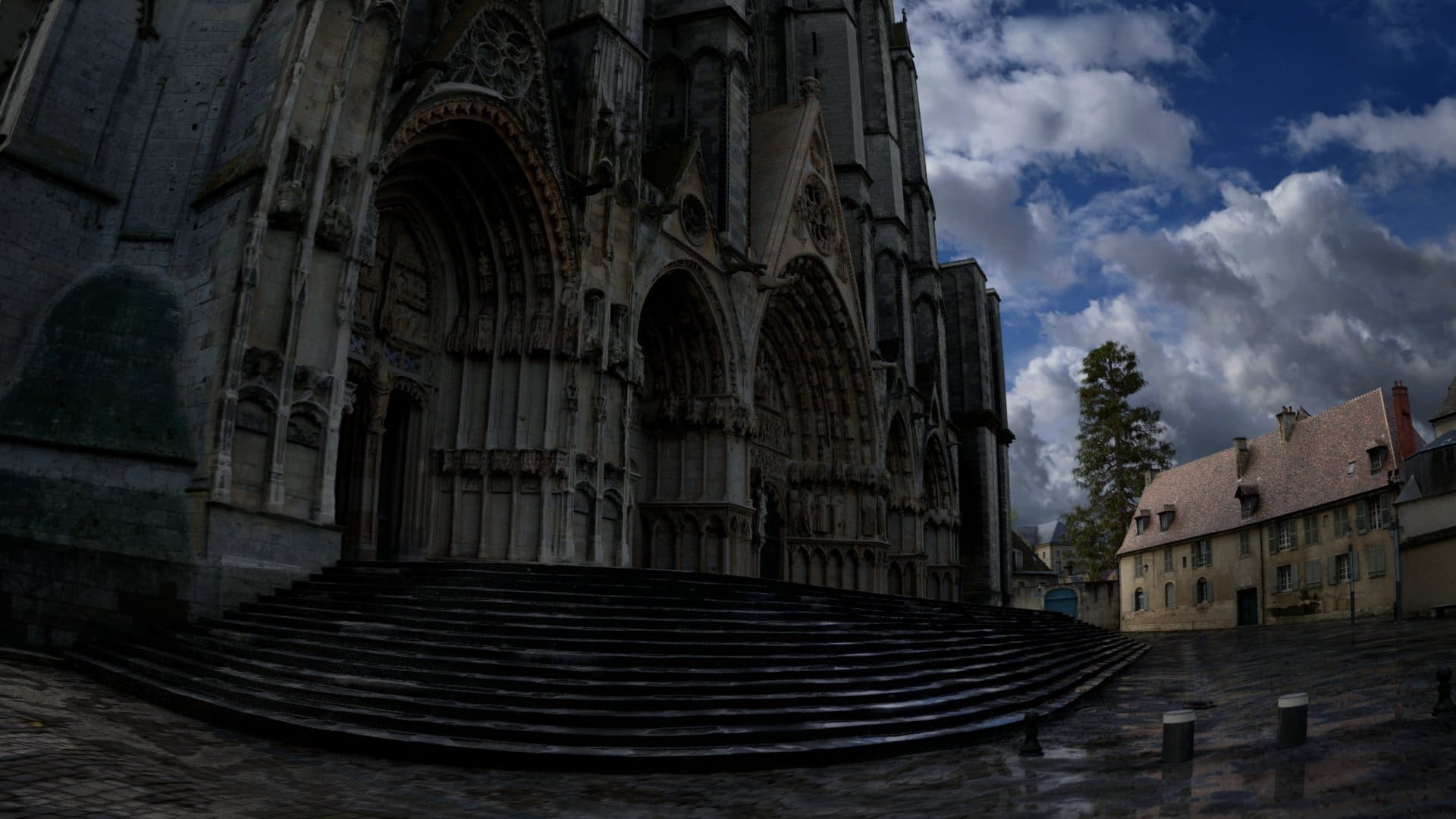 Years of work were needed to achieve this project, including a lot of photogrammetry work : 50 000 pictures taken across 3 years that were then used to create several 3D models used in the movie.

Here is an interview of the director…

3DVF : Denis Pontonnier, you have produced “The Round of the Seasons and its Animal Totem”, an atypical project centered about a Gothic cathedral …To start with, what’s your background, and why did you launch this project?

Denis Pontonnier : I was trained in cinema at the Louis Lumière School, I worked as a camera operator, director on institutional films, documentaries and some fictions. I was interested for a long time in computer-generated image, at first out of reach, I began as an autodidact at the mid-90s, I had the chance to carry out my first broadcast virtual simulations for a TV documentary about bats (“Life upside down”, winning sequences at the Imagina 1999 festival). I persevered in this type of production for television, produced in Bourges (close to the cathedral) for a few years. Seeing little evolution possible towards the creation of a real studio, I extended my exploration with research of development and coding of plug-ins for Lightwave3D software. I provided a rather large set of freeware tools and it became my main activity.

I had recalled my desire to model the cathedral after it was classified as a World Heritage Site by UNESCO, but my first photogrammetry tests, without the current algorithms, quickly moderated my ambition. About ten years ago, the medievalist Andrew Talon carried out a complete scientific laser scanning of the cathedral, as for Notre Dame de Paris, a cloud of a few billion points. I quickly understood that this research model would probably not be accessible to the public, or in any case would be very heavy to manipulate in order to obtain a mesh or to proceed to its reduction or to extract textures. For my part, I aspired to elaborate an aesthetic or artistic project, rather than a didactic one. The arrival of an affordable range of photogrammetry software with pixel recognition from a series of photos, opened the door for me.

3DVF – The film contains real images and it’s also based on a 3D model of the Bourges cathedral and its environment. A considerable amount of work has been done to create it, including several tens of thousands of photos… Concretely, how did you organize and manage such a massive capture? What strategy and tools did you then use for the photogrammetric reconstruction?

About 50000 photos over 3 years, per session of about 250/300 photos per session, all the photogrammetry was managed with Agisoft’s Photoscan software (renamed Metashape), very efficient with the use of GPU, at the end I broke a camera and my graphic card died after the film. The software manages the camera/photo alignment, produces a point cloud, then a mesh and texture extraction. I started by generating a first portal, which was used as a reference to align everything else… For each block,I used a high-resolution model as a base and to capture later normal maps and a model reduced by decimation to extract geometries from sculpted parts. All flat parts or just the edges like archways or repetitive ornaments have been remodelled on a layer over the reduced scan.

The two seamlessly parts are rendered homogeneously by texture baking performed in Lightwave on another UV Map with fewer seams and space optimization. I followed a particular procedure for trees and vegetation, with my plugin DP Verdure to generate trees, starting from the global form connected then to the 3D scan and using my own instancer alongside the native instancer of Lightwave for the distribution of plants and grass. The entire model, exterior and interior cathedral as well as the surrounding neighborhoods were oriented and brought to real dimensions, in order to be able to apply a simulation of solar illumination with DP Sunsky (Hosek model) and the animated characters. DP Sunsky portals were used for lighting the interiors There was no photogrammetry for texturing people, it was a 2D to 3D approach, modifying the mesh in Modeler, baking the textures and manually completing.

3DVF : It was then necessary to rework the different elements: correcting errors, reconstruction defects, non-photographed areas… A task again imposing. How did you approach it?

The absence of a high point of view can be partially compensated by distant viewpoints in long focal length, but there are necessarily limits of wanting to capture a monument of this size without the help of a drone. The north tower accessible to the public offers an interesting point of view for 360 panos and the environment, I had some memories of an exceptional visit with a guide on the high passageways.

I consulted several books and a series of panoramas made by Andrew Tallon, these elements were used as a basis to recreate some of the high paving or to approximate the parts inaccessible or invisible to the public.

Next page : the second part of the interview – technical challenges, rendering and more !

Rumba : will this new tool launch a revolution in animation ?

The VFX magic of Jingle Jangle, with Framestore Montreal