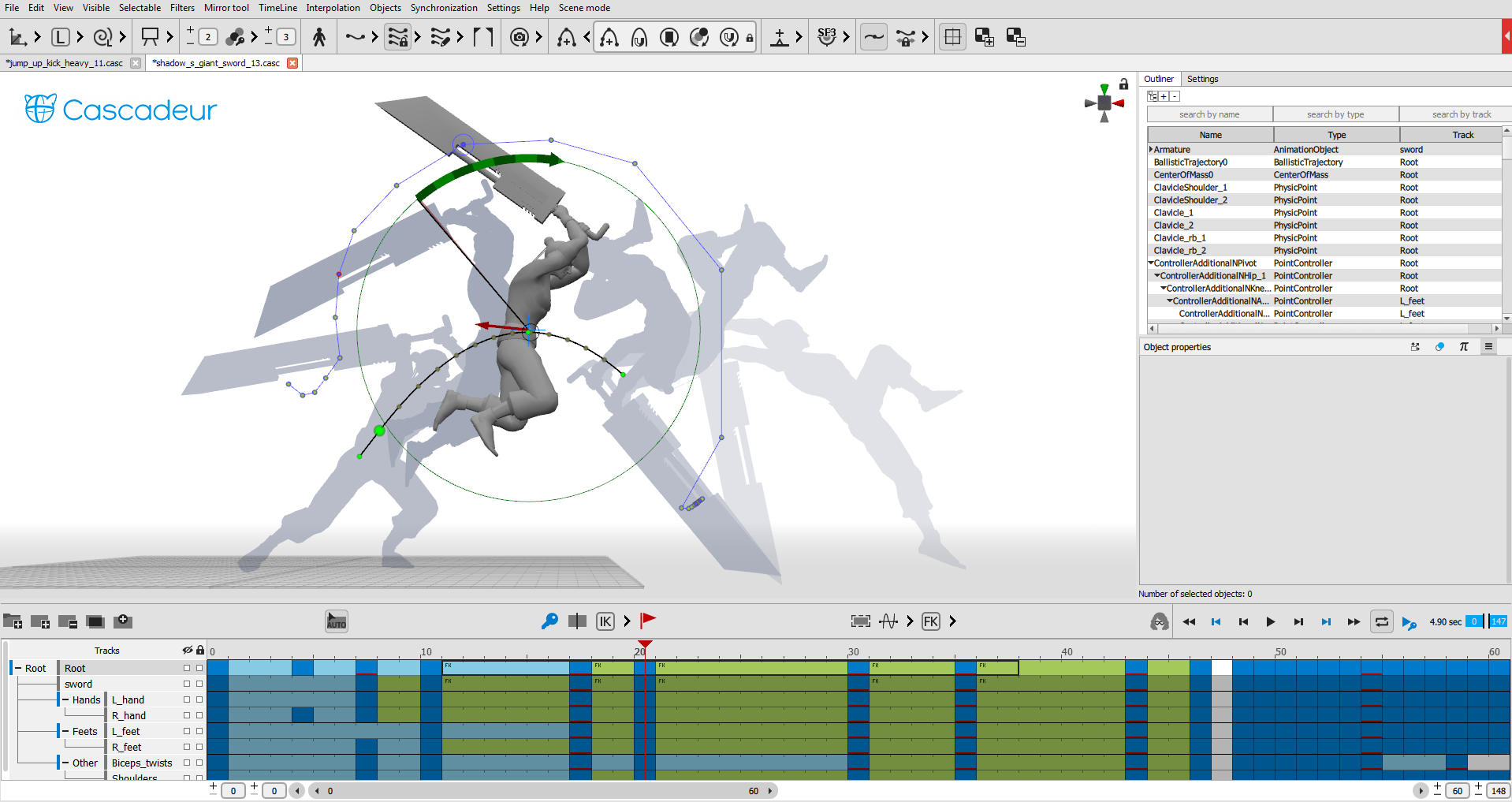 Accueil » Rédactions » SIGGRAPH 2019 : Cascadeur – are physics and deep learning the next step in character animation ?

At SIGGRAPH 2019, we had the opportunity to interview the team of Nekki, a videogame company known for several mobile games (Shadow Fight, Vector, 11×11). A few months ago, Nekki announced that they were working on an unusual animation tool, Cascadeur. Still in beta, this software uses physics and deep learning to make the animation process easier. In this interview, the Nekki team explains how and why they decided to create such a tool, and what we can expect from Cascadeur in the future.

3DVF : What is your view of the current animation market and where does Cascadeur fit ?

Nekki : There is no doubt that the market for 3D animations will grow in the future and more realism will be required. For instance, we see more and more 3D animation in movies. Life of Pi is a good example, everything is animated in a very realistic 3D. This is the case in games as well. Especially in the action, sports, and role-playing genre, where there is a high demand for such realism. With Cascadeur, we want to provide animators in the film and games industry a cost-effective tool to create realistic and believable character animations without relying solely on motion capture.

Another thing we would like to achieve is to make 3D animation more user-friendly. Currently creating 3D character animation is a very complex task, and it’s not easy to acquire the skills you need if you’re a new indie developer. One of our goals is to lower the entry barrier for beginners. With Cascadeur it will be possible for indie developers and novice animators to simply download the software and achieve first realistic results already after 20-30 hours of training. With the software we are developing, we hope to make the animation process easier and more user-friendly for everyone – no matter if he or she is an experienced professional or a beginner.

3DVF : What are the pros and cons of physics-based character animation?

In our opinion, there are a lot of pros. One of the biggest advantages is that you can use physics-based animation to circumvent the “uncanny valley effect”. Everyone knows this effect, even if they didn’t hear the name before.

If a puppet or an android is almost human-like but differs only by very slight deviations from a real human, we find it weird. These small deviations raise negative feelings in us. On the other hand, very comic-like characters like Mickey Mouse or Japanese manga characters evoke positive feelings and sympathy in us. The same goes for movements of androids: only if they move 100% humanly, they do not generate suspicion and aversion in us.

There are only two ways to overcome the uncanny valley in animation: motion capture and physics-based animation tools, such as Cascadeur. Motion capture, however, has certain disadvantages. For example, you’re largely limited to bipedal, human characters. But what if you wanted to animate a dinosaur or a giant snake? When using physics-based animation you can achieve results that look realistic for any kind of character.

Another pro is, for example, if you mocap someone standing on a tumbling bridge, it is hard to reproduce the bridge breaking down in real life. In virtual reality it is easy and you do not have to worry about the whole scenery. If we take bipedal characters, as another example, and you want to show a complex trick like a spinning Kung-Fu jump kick, then you have to find and hire someone who can perform such Kung-Fu jump kicks. There are no limitations like this in physics-based animation.

3DVF : Nekki is mainly a videogame company, why did you decide to launch Cascadeur instead of keeping it as an in-house tool?

Originally Cascadeur was just a hobby of one of our company founders. He created the first physics-based animation tools just for private interest and joy in physical experiments. Several years after our game company was founded, he and his companion decided to use these tools in our first action games. The old tools were not user-friendly and in our previous games, such as Vector or Shadow Fight 2, the engine was limited to 2D animation. Also, most of the animation process was still done manually and Cascadeur wasn’t a complex system at that time.

But during the following period of 10 years, these tools grew into full animation software. It wasn’t a straightforward and easy development, and we had several complete redesigns. After the first few years, for example, we decided to rewrite it from Delphi to C++.

Later, when we were developing Shadow Fight 3 and needed to have realistic 3D graphics, Cascadeur already included real perspective cameras and realistic human character models. That’s when we understood that if we can use Cascadeur for our in-house development, then basically anybody could use it.

We believe that the market needs a powerful tool for physics-based character animation. We hope to improve the animation process for the whole industry in general and therefore we are developing Cascadeur as a separate product. Currently, already more than a dozen developers are working on the beta-version.

3DVF : The first wave of the closed beta-test started in February 2019. What kind of feedback did you receive?

It was quite positive. Many beta-testers were able to create believable physics-based animation. Some experienced professionals, such as Polyarc’s lead animator Richard Lico achieved impressive results after using Cascadeur for only 20 hours. He created some really awesome animations, posted them on Twitter and people couldn’t believe they were made without mocap.

There was a lot of feedback from large AAA movie and game companies too, telling us that they plan to implement Cascadeur in their pipeline as soon as it will be released. Then we also had very positive feedback from total beginners and people for whom animation is just a hobby.

After analyzing the feedback, we understood that Cascadeur is still not as user-friendly as we would like it to be and that we have to improve the UI to make the animation process easier. The data we received from our users in the first online-survey was very interesting too. For example, we had more Blender users than Maya users, so based on that it seems we have many hobbyists and indie users, as they tend to use Blender more often.

3DVF : You have unveiled a teaser for a new deep learning tool, currently in Alpha. What will it bring to the users?

This is just our first step in using deep learning algorithms to improve the animation process. We hope that with this AI-controlled auto-posing tool beginners won’t need to spend a lot of time on posing and will achieve some satisfying results faster.

We also hope to make the whole prototyping process faster this way. Even though the posing tools still have to be improved a lot, our teaser proves that they can already be used for basic prototyping.

Another way we would like to use deep learning is to provide the ability for our physics tools to change the relative position of the body parts in the animation sequence. Currently, our tools can only move and rotate the entire character, but once we finish our deep learning tool they will also be able to change poses without breaking them. This will allow finding better solutions that more closely match the original animation.

3DVF : You explained that you plan to bring deep learning to other parts of the animation workflow. Could you tell us more about this?

3DVF : Have you decided yet which business model Cascadeur will rely on?

It is too early to talk about pricing, as we are still in a closed beta-test. After we have recently added the rigging tools to Cascadeur we will now proceed to the open beta test. In the open beta-test, users will be able to download Cascadeur for free, rig their own characters and already use Cascadeur in their projects.

For non-commercial use, Cascadeur will most probably be available for free. For commercial use, we are still discussing price models, but this will be decided when we get closer to the release. This might be in a year, but it could take longer, as we do not want to announce the final release date until we are 100% satisfied with the product.

We plan to have a permanent free version for indie developers and a paid version for large companies, which might have some API and can be used as a plug-in for popular engines. But to be honest, nothing is decided yet.

3DVF :Where do you see Cascadeur in a couple of years?

We plan to launch the open beta-test in the near future and to release a more powerful full version of Cascadeur within two years. The later version will contain many advanced features, such as facial rigging, a poses library, an external 3D-graphics engine, advanced collision detection, and skinning functions. Ideally, we aim for Cascadeur to become a standard tool in the production of AAA games as well as indie projects.

Besides game development, we also see great potential for Cascadeur in movie production. We met some movie animators at GDC and SIGGRAPH this year. The thrilling stories we were told in these meetings were really amazing, and it’s incredible how even the biggest movie and VFX studios are still struggling with the downsides of motion capture. An award-winning movie animator, for example, told us that he sometimes has to put on a suit with attached artificial body parts himself and then imitate a certain animal or a monster.

In that sense, we are confident that the film industry, in particular, will benefit greatly from Cascadeur in some years. And since computer animations will play an increasingly important role in movies in the future, this market could one day become our main market.

For more information about Cascadeur

SIGGRAPH 2019 : our interview with Blackmagic Design