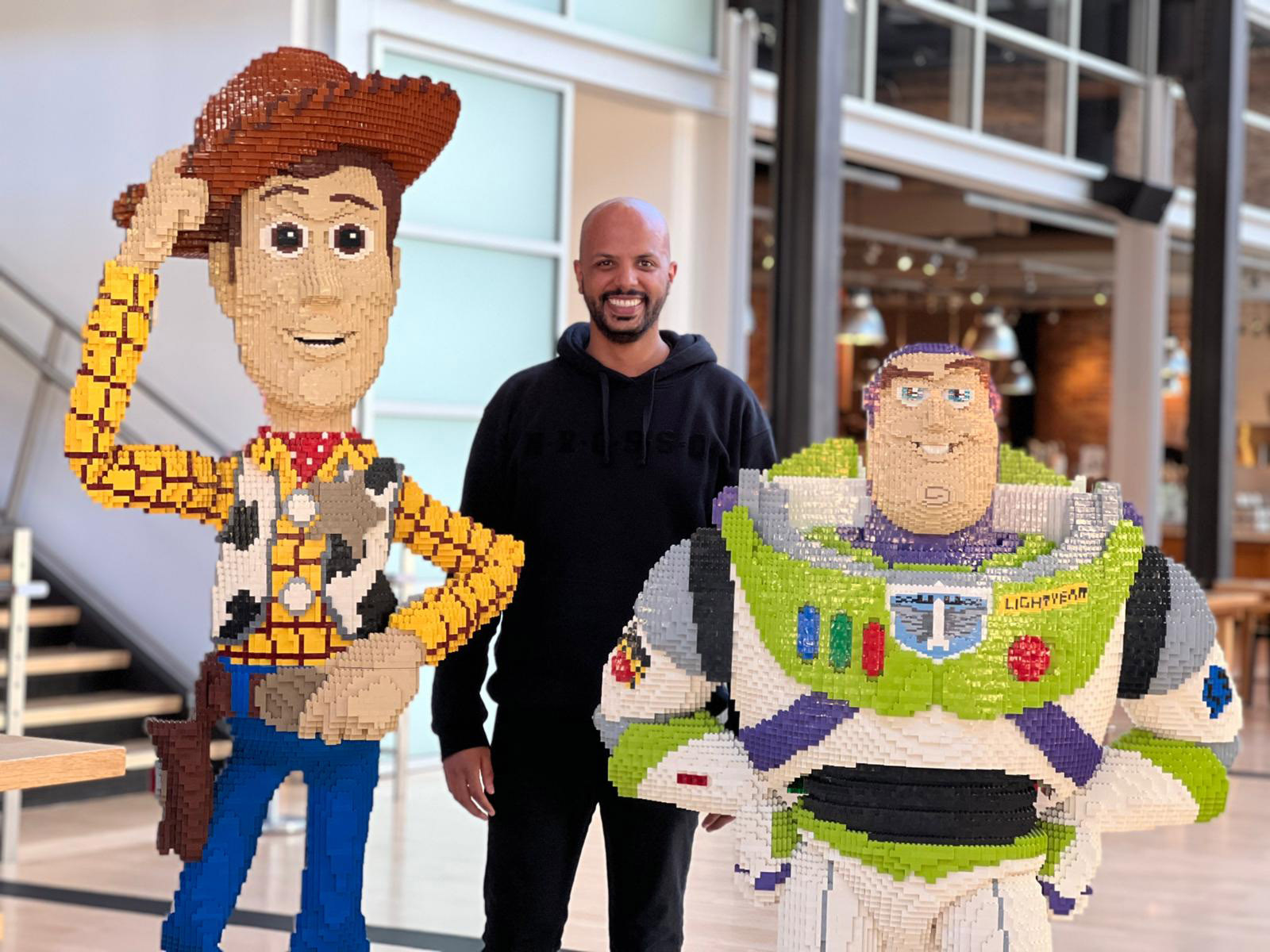 Earlier this year, we interviewed French animator Eddy Okba on his work on movie franchises such as Despicable Me, Sing, Spider-Man. At the time, he could not tell us much about his work at Pixar on Lightyear. The animated feature has now been released and is streaming on Disney+, so here are a few details about his work on the movie!

In this interview, Eddy Okba explains how he used hockey pads to animate an iconic moment, gives us a few details on the animation software used at Pixar, Presto. We also asked him about being a new recruit at Pixar and how the animation department is organized.

3DVF: Hello Eddy, You worked as an animator on Lightyear, the latest Pixar animated feature film. Which characters did you work on?

Eddy Okba: Hi, I had the chance to work on Lightyear and I animated Buzz and the crew.

3DVF: You were tasked with animating a scene in which Buzz is recording one of his famous mission logs. In other words, one of the most iconic characteristics of Buzz as a toy. How did you approach this animation, in this new movie where Buzz is now a real human being?

I watched the Toy Story movies again and studied how Buzz was animating for those moments. I usually don’t use video references often but for this one I put up my ice hockey pads as my homemade space ranger suit and tried to get the gesture and subtleties from the acting voice (Chris Evans). The difficulty was to mimic Buzz the toy and to not be too caricatural. The animation team helped me to find this limit when I pushed the caricature too much or when it was not specific to Buzz. It was so fun and meaningful to revisit this iconic Buzz moment.

3DVF: Can you also tell us about your work on the rest of the crew?

In this shot, the crew is in the background trying to open a door. It was all pantomime animation, no dialogue, only clear physical actions that define their own attitude. They are back to the camera so we cannot see their expressions either. The challenge was to express themselves in a few poses. With Buzz in the foreground, I had to make sure that the audience looked at the crew or at Buzz at the right moment. It was like staging a theater play.

3DVF: The animation tool used at Pixar is an in-house software called Presto: was it easy to get used to it, after working with other tools in various studios such as Illumination, Sony, Animal Logic? Can you tell us a little bit about your experience using Presto?

I have been using Autodesk Maya for 15 years so it took me some time to get used to Presto but it’s a very intuitive software designed for animation. I have seen some demos online in the past and now I have the chance to learn and explore all of its features. Presto is very powerful, very stable and customizable. There are as many ways to use it as there are many animators. I’m still building my perfect layout and way to work with Presto by asking and sharing with my colleagues.

3DVF: During the whole production, you worked remotely. How and how often did you get in touch with the rest of the animation department? How challenging was it to work in such conditions?

It was not too difficult as most of the studios have been working remotely for the past 2 years. We’re getting used to working from home using chatting apps and video calls. Pixar and the animation department did their best to make the production and the communication easy and flawless. As a new hire, you have a mentor that welcomes you and is here to talk to you on a daily basis. Naturally, the whole department is very friendly and here to help you fit in. It’s very easy to jump on a call to meet and talk with people. They also created coffee break rooms, hangout rooms and many informal crew meetings on calendars so people can casually socialize. On the show, reviews were daily and communication with the supervising team and production was easy and often.

3DVF: Was everyone working remotely? How was the animation department organized, and how different was it from what you experienced in other studios?

I think that most of the people were working remotely or hybrid. Usually an animation department is composed by the animation supervisor and each team is managed by an animation lead. So an animator is part of a team with a lead for the whole show. Some studios have sequence leads, there is no team but an animator is assigned to a sequence managed by a lead. The animator would jump from sequence to sequence and so from lead to lead. At Pixar, there is no team or sequence lead. An animator is very independent and owns their shots. There are leads, even drawover leads, that are here to assist and help you but they’re not in charge of an individual or a specific sequence. It gives the artist the freedom to express their ideas and to talk directly to the director.

3DVF: Can you tell us a little bit about your interactions with other departments, such as a rigging team, the character FX team or maybe even the lighting department?

The rig was already on point when I joined the show and there were no special effects in my shots. I did communicate with the lighting department as some of the lights are turning on in my scene. I have been asked by the lighter to provide him a timing of when the lights switch on. I like this direct interaction with another artist where we can collaborate on the same shots. We ended up animating the lights as neon tubes flickering before finally switching on, like it was in the opening scene in Alien.

3DVF: What are you the most proud of in this movie, and why?

Being a 8 year old-boy watching Toy Story in theaters and now being able to animate one of my beloved characters from childhood is a dream come true. Lightyear is a true love letter to science-fiction movies and I feel lucky to be part of this space adventure.