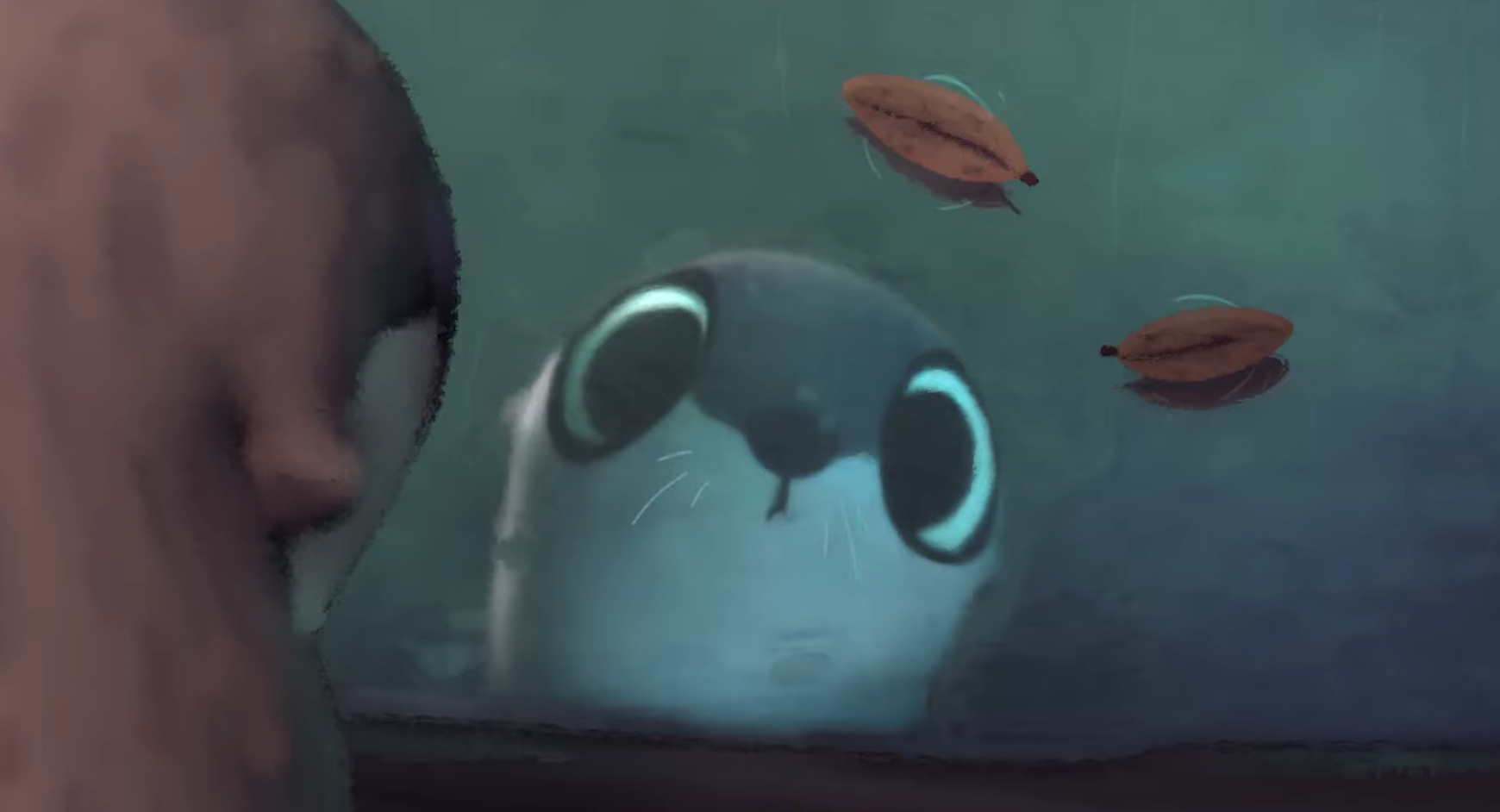 Accueil » Rédactions » Interview: I am a Pebble, a touching and stylized French short featured

Interview updated on 06/13/2021 – the short is now available online, as well as a video making-of! We included both videos in the article. We also added a few words from the team reacting to the fact that the short is now Oscar-Qualified.
This interview was first published on 11/25/2021.

Produced in 2020 by students of the French school ESMA, I am a Pebble (“Je Suis Un Caillou” in French) is a charming thesis short film about an otter:

Bulle [“Bubble”], a young otter, lives with three mossy stones and thinks of them as her family. Bulle imagines them as real otters, but as she becomes aware of their true nature, she has to face her loneliness.

The short film has already been featured in several major festivals, and may have watched it this summer during the SIGGRAPH Computer Animation Festival Electronic Theater: I am a Pebble has been awarded the “Best Student Projet” prize. 3DVF is an official media partner of SIGGRAPH 2021.
Furthermore, the short is now Oscar-Qualified.

In the meantime, the team behind I am a Pebble agreed to tell us more about the film: Mélanie Berteraut, Yasmine Bresson, Léo Coulombier, Nicolas Grondin, Maxime Le Chapelain and Louise Massé aswered our questions about the technical and artistical challenges they faced during the production.

Here is the short film, followed by the interview:

3DVF: One of the most charming things about I am a Pebble is the stylized rendering. How early did you make this choice ? Was it hard to find the right style ? Can you tell us about your sources of inspiration ?

M. Berteraut, Y. Bresson, L. Coulombier, N. Grondin, M. Le Chapelain & L. Massé: The The stylized graphic style came at the very beginning of the project. We already made up our mind about our inspirations when we submitted the draft to our teachers. The purpose of this “2D painting” style was to soften the hard edges of 3D, and to serve the sweetness and innocence of the story. We agreed very quickly on the targeted style, the hardest thing was to find a way to actually do it in 3D. As we didn’t find our ideal 3D reference in existing works, our main inspirations were the illustration work from Gop Gap, and the short film The Dam Keeper from Tonko House.

3DVF: How did you share the workload within the team ?

This film required some specific skills as we were diving into the unknown and we had the chance to have a team which specialized quickly, we all had different preferences and we finally all had one main responsibility at a time, some lasted for the whole project like the RnD and Treatment process for Léo and others were faster than other projects like shading and texturing. We went this way as we wanted to take the required time for key elements like months of colorscripting that made lighting and compositing way faster.

Specialization also meant coordination as we had to take care of the workload of others to organize our time and be available when they are ready. The frequent and great communication was the key here. All this helped to have a fluid pipeline and to get the whole team involved in every shot.

3DVF: What begins with an otter in the wild quickly turns into a deep and touching story. I am a Pebble deals with various themes: a chosen family, delusion, loneliness… How did the story take its final form? How challenging was it to convey all those themes and ideas visually, without any word ?

We had many problems telling this story, like how to build a dramatic scene with one of the main characters being unable to do anything and the other one being unable to speak, or to make the way Bulle perceived the Pebbles understandable for the audience. We could have used a narrator as we thought of the story like a children’s book at first but it clearly did not stay our intention.The story is only about Bulle and the Pebbles and so we decided that only them would tell the story. Writing has been essential to define characters but mostly to provide structure and place the right element of Bulle’s disillusion at the right moment, to make her progress and face reality. But the true writing was during the storyboards by making the unwritable thought process visible through framing, staging and acting.

We clearly knew where we wanted to end so we started from there and that way, we had our resolution and we could rebuild the problem piece by piece going backwards. The theme of family was assured by the presence of other families like the hedgehogs or the chicks in the film and all those littles animals greatly help to highlight Bulle’s loneliness. In a way, secondary characters provided a norm that differs from our main protagonist and make her interesting. We also used Bulle’s imagination to dramatize reality and show her desire to see the pebbles as her family. Color work and music were also two key elements to show progression in the mood, and really telling the story through each component of the film.

3DVF: “Bulle”, the main character, is a young otter. How did you approach the character design, rigging and animation of this character ?

Bulle had to be simple as she is young and is almost like a blank canvas that still has to define herself. Then we worked to create an otter with simple shapes, something childish and harmonious. We thought of the hero of  “The boy and the world”, a very moving film picturing a little boy with only both eyes on his face and very simple, yet warming designs.

We really thought of all our designs in 2D to be expressive in the best way possible while keeping the simple head shape and that was where we struggled a bit when it came to 3D. It was challenging to make this graphic character work from every angle as her eyes had to be round and flat from the profile angle to the front one. To rig a one piece – fluid character in order to maintain some clean 2D shapes was also quite hard !

Up next: animals, FX, plants…

Interview: The Source of The Mountains, an Oscar-worthy French short film

Interview – Migrants: this polar bears might win an Academy Award