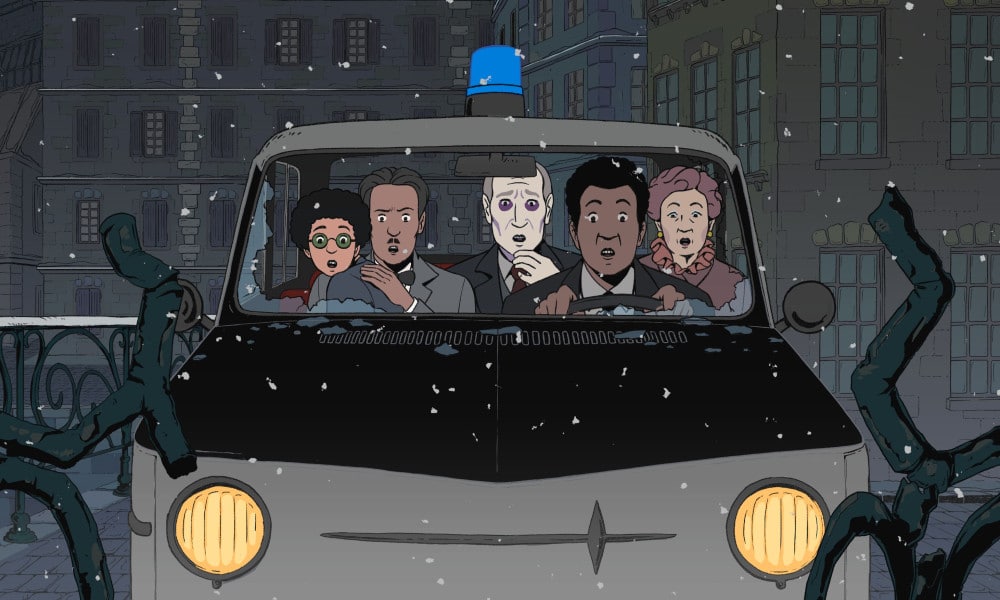 Wes Anderson’s latest movie, The French Dispatch, will be in US theaters on October 29th.

The movie “brings to life a collection of stories from the final issue of an American magazine published in a fictional 20th-century French city”. The film is inspired bu Wes Anderson’s love of France and of The New Yorker.

Wes Anderson’s love of France is reflected in the casting choices (several French actors and actresses play in the movie, such as Léa Seydoux, Timothée Chalamet, Mathieu Amalric, Guillaume Gallienne) as well as the score, composed by Alexandre Desplat. But Wes Anderson (The Royal Tenenbaums, Moonrise Kingdom, The Grand Budapest Hotel…) did not stop there.

Choosing Werlen Meyer is far from surprising. This studio was launched in 2018 by Gwenn Germain, Yann Germain, Valentin Adiba, and Gwenn Germain was head of 2D animation on Isle of Dogs.

Werlen Meyer told us that the animated sequence was inspired both by Belgian cartoonist Hergé and by the graphic style used by The New Yorker.

Werlen Meyer handled the artistic direction and supervised the creation of the animation. The production itself was done at Studio 3.0, a French studio located in the city of Angoulême. Wes Anderson was only in contact with Gwenn Germain, who in turn was in charge of translating his vision into animation. 2 months of preproduction, 5 of production were needed to create the sequence, with a team of up to 15 people.

The French Dispatch is now playing in French theaters, as well as in select US theaters. It will be playing in US theaters nationwide starting October 29th.

The Last Harvest: a mystic and post-apocalyptic short film

Lightyear: a brand new trailer for the upcoming Pixar movie

Gloire Amère 40000: what happens once the quest is completed?

Go Fishboy: a father, his son and the art of sushi making