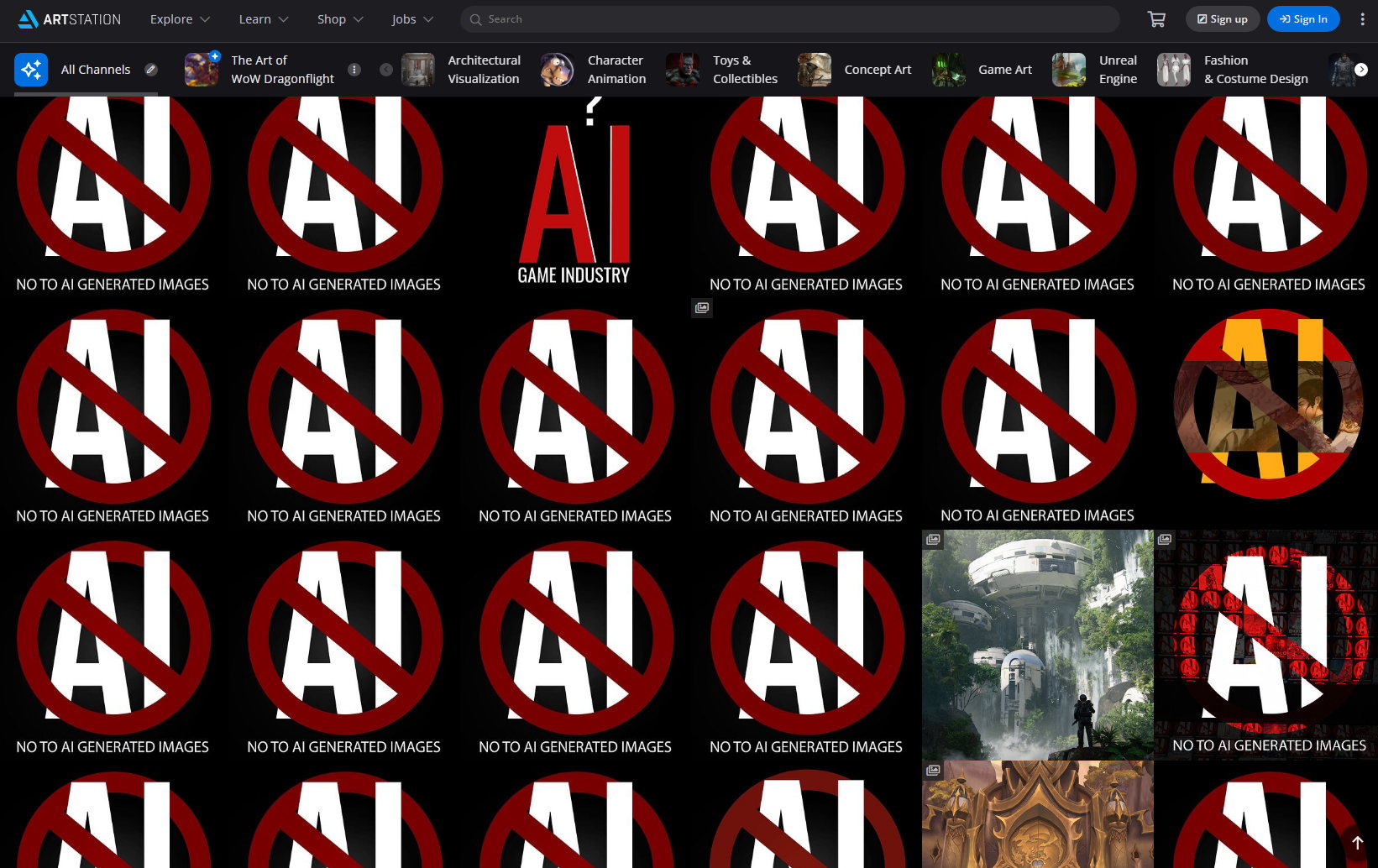 Accueil » ArtStation: how and why artists are fighting back against AI

An unusual demonstration is taking place over at Artstation. This website, widely used by artists to create portfolios and share their digital art, has been flooded with anti-AI pictures, as shown in the screenshot above.

No doubt you’ve noticed the surge in AI-generated content online in the last few months. Tools such as Midjourney, DALL-E 2, Stable Diffusion are booming, with impressive results. If you’ve never used them, here is the basic idea. Most of these tools are used by typing a “prompt”, a few words to tell the AI what kind of picture you want, both in terms of content and visual style. These tools can even be used to mimic the style of specific artists, which is one of the reasons they’ve been criticized. Some AI tools can ingest existing pictures as an input in order to create variations/stylized versions of this picture. They can be used to create animations (although this kind of use is still in its infancy), and text (no, this article was not writtent by an AI).

There are, however, many ethical and legal issues related to AI tools. Here are the main ones:

Of course, artists and the creative industry as a whole have reacted to this new trend in various ways. We had the opportunity to discuss the subject with many of them in the last few months. Some just don’t want to have anything to do with it or think it’s a huge threats for creators, while other have told us they are using AI tools internally, sometimes just as an experiment. Some artists also feel that AI-generated pictures should not be displayed on websites such as ArtStation alongside artworks that required hours, dozens of hours of work.

An online demonstration on ArtStation

On ArtStation, artists have launched an impressive demonstration that is spreading like wildfire: “No to AI generated pictures” posts have been sumbitted hundreds of times.
As shown in the screenshot below, the Trending section is full of these pictures, which means lots of users have been clicking on them, commenting them, liking them.

This demonstration is reminiscent to what happened on DeviantArt recently. The online art-sharing platform face strong opposition after the launch of DreamUp, an AI generation tool. At the same time, default settings on the website allowed DavientArt to use the art shared by users to train this AI.
In the end, DeviantArt had to back down and chanded the default settings. They still work on DreamUp, however, and AI content can be posted on DeviantArt.

Only time will tell how Epic Games, the owner of ArtStation, will react to the current protest.

65: Adam Driver is stranded back in time (trailer)

USD Pipeline and Matrix Resurrections: our interview with RISE at SIGGRAPH 2022

The year of motion capture at SIGGRAPH: Rokoko interview – announcements and future tech