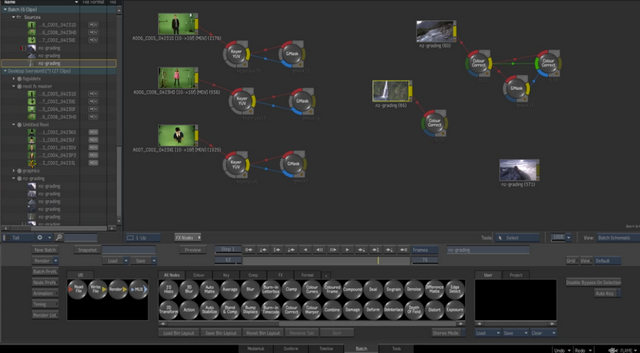 “As an integral tool for the highest-quality visual effects for film and television, Flame has been used on numerous Super Bowl commercials, top-rated TV shows and blockbuster movies from ‘Titanic’ to ‘The Avengers.’ Flame artists are often called upon to ‘do everything.’ With changes to the industry, they required an evolved toolset that would allow them to oversee entire projects; the Flame 20th Anniversary edition is that tool,” said Marc Petit, senior vice president, Autodesk Media & Entertainment.

The new release of Flame Premium brings core post-production tools into a unified creative environment where a full editorial timeline is now closely linked to the popular Flame Desktop, Batch and Action. The redesigned workflow also features improved access to media and a new task-based workflow with one-click access to the main finishing tasks and creative tools.

Al Jazeera Media Network broadcasts to more than 260 million households across 130 countries worldwide. “Working on a 24-hour news cycle with over 70 bureaus around the world, Al Jazeera requires a post-production tool that’s fast, efficient and flexible. Viewers across the world constantly rely on Al Jazeera as their source for news and current affairs. As news events unfold worldwide, it is our job to cover breaking news stories with a fast turnaround. For this we rely on Flame Premium, a tool that provides us with a new task-based workflow that makes our job much easier,” said Al Jazeera Creative Division Director Ramzan Alnoimi.

Now available at the top level of the application, the redesigned timeline allows artists to more easily work within the context of the timeline. Artists can now build timelines from scratch or match an offline cut without leaving the desktop. With this new integration, artists can more easily accomplish editorial tasks and move seamlessly between creative and editorial functions.

With an impressive resume that includes multiple Emmys and work on “Modern Family,” “Entourage” and “Star Trek: The Next Generation,” CBS Digital in Los Angeles has a distinguished history of pushing creative boundaries. The studio currently relies on a robust Autodesk creative finishing pipeline of two Flame Premiums, two Flames and two Flares. “For me the great thing about Flame Premium is that everything works seamlessly. It’s the same language — the way they all live together in the same universe is its greatest strength. Now with an integrated editorial timeline that will further streamline our workflow, we’re even more thrilled with the evolution of the product,” said CBS Digital Visual Effects Supervisor and Head Creative Director Craig Weiss.

Glassworks, a multiple award-winning commercial post-production boutique, recently upgraded their Flame Suite to better compete in the competitive global marketplace. “When a world-class director is looking over your shoulder and requesting new backgrounds, changing day into night or retiming a commercial to new music, you have to be able to make those adjustments in real-time and make it look easy. My hero Flame suite makes those kinds of ‘impossible’ changes possible. Now with the improved GPU acceleration, I’m ready for the next killer deadline,” said Glassworks Head of Engineering William Isaacs.

Customer presentations and product demonstrations will be streamed live from the Autodesk IBC booth to the AREA — Autodesk’s digital entertainment community. Flame Premium 2013 20th Anniversary Edition and the 2013 Extension releases of Autodesk Flame and Autodesk Flare software are anticipated to ship later this autumn. The 20th Anniversary edition and extension releases will be available exclusively to Autodesk Subscription customers. For features, Subscription benefits and video tutorials, visit the Flame Premium product center, join the Flame Community on AREA or friend us on our new Facebook page.